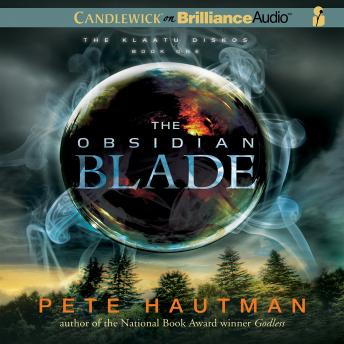 The first time Tucker saw the disk, his father disappeared into thin air. The Reverend Adrian Feye had climbed onto the roof to fix a loose shingle.. and suddenly he was gone. An hour later, the Reverend came walking up the road, tattered and sunburned, bringing with him an unspeaking, yellow-haired, dark-eyed girl. He refused to say where he had been, instead declaring that there would be no more prayer in the Feye house: He had lost his faith. Now Tucker's family is unraveling. The Reverend spends hours brooding in his study. Tucker's once warmhearted and loving mother withdraws from the world, claiming she doesn't care to be watched by ghosts. And, above them, the unearthly disk comes and goes. Then, one day, both of Tucker's parents vanish. From the distant past to an even more distant and terrifying future, Tucker desperately searches for his parents... and discovers the astonishing secrets of the Klaatu diskos.