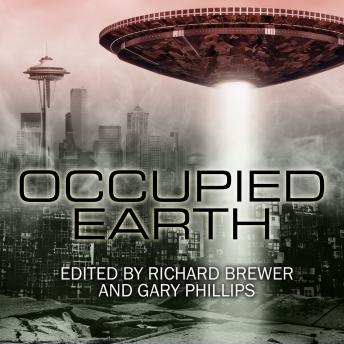 Occupied Earth: Stories of Aliens, Resistance and Survival at all Costs

For years, writers and filmmakers have speculated about the possibility of the Earth being invaded by aliens from another planet. But what if the aliens have been watching us, infiltrating us via human collaborators, or even surgically altering themselves to look human? Occupied Earth is a groundbreaking anthology that explores the idea of what the world would look like years after its conquest.Twenty years after a successful invasion by the Makh-Ra, human beings still exist, only they have become subservient to a new race of occupiers who now govern the devastated planet. But, as much at things continue with some sense of normalcy, something has happened in the Mahk-Ra's empire. Earth, once considered a strategic beachhead of major importance to the Empire, has been downgraded in its value. Things are starting to degrade. Our planet is the last place any self-respecting Mahk-Ra officer wants to be assigned. Yet, despite everything, life continues. Occupied Earth brings us face to face with annihilation-and shows how we can pull ourselves back from the brink.

Occupied Earth: Stories of Aliens, Resistance and Survival at all Costs