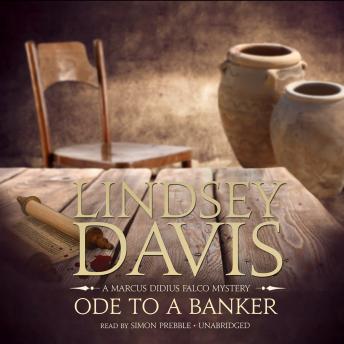 Ode to a Banker: A Marcus Didius Falco Mystery

#12 of The Marcus Didius Falco Mysteries

Can a tough detective possess the soul of a poet? After a public reading brings him rousing applause, Falco receives an offer to have his work published. But his ego takes a beating when the banker Chrysippus demands payment for putting the verse on papyrus. Hell hath no fury like an author scorned, and when Chrysippus turns up murdered—in the library, no less—it’s poetic justice. Appointed the official investigator, Falco’s soon up to his stylus in outraged writers and shifty bankers. Now it’s time to employ his real talents: deducing the killer from an assembly of suspects.

This classic whodunit is Lindsey Davis’ most satisfying mystery yet.

This title is due for release on August 31, 2016
We'll send you an email as soon as it is available!