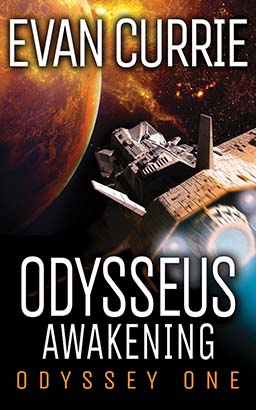 Defy the inevitable. Such is the stance of Confederation captain Eric Weston and the crew of the starship Odysseus, patrolling the outer limits of Priminae space, anticipating the Empire’s next attacks. Connected with the Terran FTL tech—the transition drive—humanity might stand a chance against the overwhelming forces. Until the entire planetary system goes dark.
Outnumbered and outgunned, the Odysseus arrives to find the Empire securing critical intelligence from Priminae ships—data that could prove disastrous in the wrong hands.
As the Odysseus enters the fray, the ship’s systems exhibit increasingly chaotic glitches, while haunting apparitions stalk the crew. As they struggle to control their own ship—and their sanity—against the tide of battle, how can they hope to grasp victory when the Odysseus itself appears to be coming to life?