Odyssey of the West II: A Classic Education through the Great Books: From Athens to Rome and the Gospels 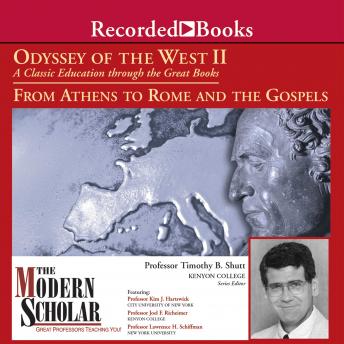 This course is an interdisciplinary series of connected lectures delivered by eminent scholars from several colleges and universi- ties. Each professor addresses an area of personal expertise and focuses not only on the matter at hand, but on the larger story-on the links between the works and the figures dis- cussed. The lectures address a series of major works that have shaped the ongoing development of Western thought. In addition to the series editor, Professor Timothy B. Shutt, other eminent scholars featured in this course are Professor Kim J. Hartswick from the City University of New York, Professor Joel F. Richeimer of Kenyon College, and Professor Lawrence H. Schiffman from New York University.

Odyssey of the West II: A Classic Education through the Great Books: From Athens to Rome and the Gospels