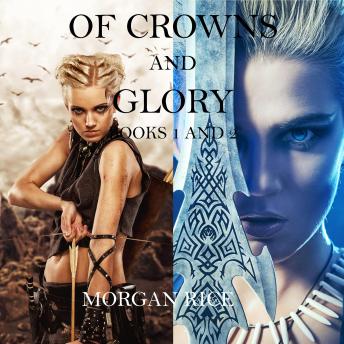 Of Crowns and Glory: Slave, Warrior, Queen and Rogue, Prisoner, Princess (Books 1 and 2)

“Morgan Rice has come up with what promises to be another brilliant series, immersing us in a fantasy of valor, honor, courage, magic and faith in your destiny. Morgan has managed again to produce a strong set of characters that make us cheer for them on every page.…Recommended for the permanent library of all readers that love a well-written fantasy.”
--Books and Movie Reviews, Roberto Mattos (regarding Rise of the Dragons)

A bundle of the first two books in Morgan Rice’s new #1 Bestselling epic fantasy series OF CROWNS AND GLORY (SLAVE, WARRIOR, QUEEN and ROGUE, PRISONER, PRINCESS). Here are two bestselling novels, all in one convenient file, which offer a great introduction to the OF CROWNS AND GLORY series. Over 150,000 words of reading, all for an incredible price—it also makes the perfect gift!

In SLAVE, WARRIOR, QUEEN,17 year old Ceres, a beautiful, poor girl in the Empire city of Delos, lives the harsh and unforgiving life of a commoner. By day she delivers her father’s forged weapons to the palace training grounds, and by night she secretly trains with them, yearning to be a warrior in a land where girls are forbidden to fight. With her pending sale to slavehood, she is desperate. 18 year old Prince Thanos despises everything his royal family stands for. He abhors their harsh treatment of the masses, especially the brutal competition—The Killings—that lies at the heart of the city. He yearns to break free from the restraints of his upbringing, yet he, a fine warrior, sees no way out.

In ROGUE, PRISONER, PRINCESS . 17 year old Ceres, finds herself forced, by royal decree, to fight in the Stade, the brutal arena where warriors from all corners of the world come to kill each other. Pitted against ferocious opponents, her chances of survival are slim. Her only chance lies in drawing on her innermost powers, and making the transition, once and for all, from slave to warrior. 18 year old Prince Thanos wakes on the isle of Haylon to discover he has been stabbed in the back by his own people, left for dead on the blood-soaked beach. Captured by the rebels, he must crawl his way back to life, find who tried to assassinate him, and seek his revenge. Ceres and Thanos, a world apart, have not lost their love for each other; yet the Empire court teems with lies, betrayal and duplicity, and as jealous royals weave intricate lies, they each, in a tragic misunderstanding, are led to believe the other is dead. The choices they make will determine each other’s fate.

Of CROWNS AND GLORY tells an epic tale of tragic love, vengeance, betrayal, ambition, and destiny. Filled with unforgettable characters and heart-pounding action, it transports us into a world we will never forget, and makes us fall in love with fantasy all over again.

Book #3 in OF CROWNS AND GLORY will be released soon!

Of Crowns and Glory: Slave, Warrior, Queen and Rogue, Prisoner, Princess (Books 1 and 2)