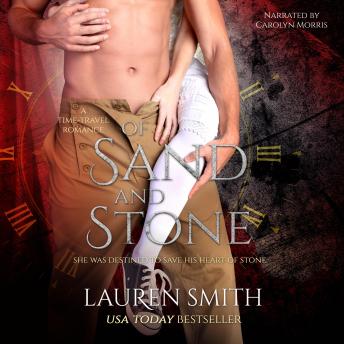 Of Sand and Stone: A Time Travel Romance

She was destined to save his heart of stone...

Bookish museum curator Rebecca Clark has given up on dating. Real life men aren’t nearly as perfect as the men in the paintings and statues she sees every day at her job. But one night she whispers a prayer to the universe to send her the perfect man. She had no idea a goddess is listening…

Devon Blake was Regency London’s most wicked lover but when he sleeps with the wrong woman and leaves her unsatisfied, he finds himself cursed by none other than the Goddess of love herself. After living two centuries trapped as a marble statue, Aphrodite gives Devon one chance to redeem himself or he’ll face an eternity of made of stone. He must prove he can satisfy a woman’s every desire without satisfying his own.

When Rebecca discovers a naked man in her art gallery instead of a priceless statue at midnight she has no idea he’s the answer to her prayers. Aphrodite has sent Devon to be Rebecca’s perfect man. Can Devon earn Rebecca’s love and trust by proving his selflessness or will it be too late?

Of Sand and Stone: A Time Travel Romance

This title is due for release on January 8, 2018
We'll send you an email as soon as it is available!