Of Spice and Men 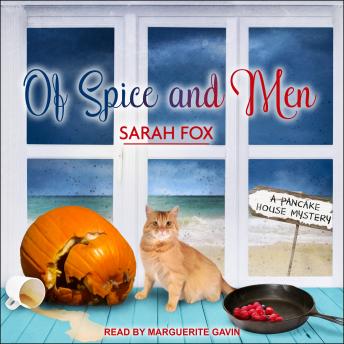 With a Hollywood film crew in town to shoot a remake of the horror classic The Perishing, the residents of Wildwood Cove are all abuzz. Even Marley McKinney, owner of The Flip Side Pancake House, can overlook the fact that the lead actress, Alyssa Jayde, happens to be an old flame of her boyfriend. After all, the crew loves Marley's crêpes-so much so that Christine, the head makeup artist, invites her onset for a behind-the-scenes tour. But when Marley arrives, the special-effects trailer is on fire . . . with Christine inside.

The cops quickly rule Christine's death a murder, and Alyssa a suspect. Marley's boyfriend insists that the actress is innocent, but when Marley sticks her nose into the complicated lives of The Perishing's cast and crew, she discovers more questions than answers. It seems that everyone has a hidden agenda-and a plausible motive. And as the horror spills over from the silver screen, Marley gets a funny feeling that she may be the killer's next victim.

Of Spice and Men