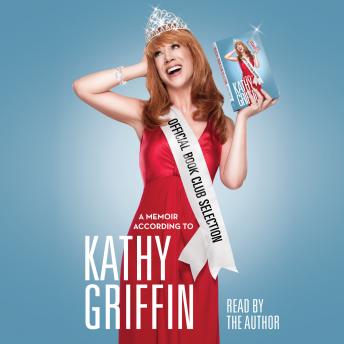 Official Book Club Selection: A Memoir According to Kathy Griffin

Official Book Club Selection is Kathy Griffin unplugged, uncensored, and unafraid to dish about what really happens on the road, away from the cameras, and at the star party after the show. (It’s also her big chance to score that coveted book club endorsement she’s always wanted. Are you there, Oprah? It’s me, Kathy.)

Kathy Griffin has won Emmys for her reality show Kathy Griffin: My Life on the D-List, been nominated for a Grammy, worked and walked every red carpet known to man, and rung in the New Year with Anderson Cooper. But the legions of fans who pack Kathy’s sold-out comedy shows have heard only part of her remarkable story. Writing with her trademark wit, the feisty comic settles a few old scores, celebrates the friends and mentors who helped her claw her way to the top, and shares insider gossip about celebrity behavior—the good, the bad, and the very ugly. She recounts the crazy ups and downs of her own career and introduces us to some of the supertalented people she encountered before they got famous (or, in some cases, after fame went to their heads). Word to the wise: If you’ve ever crossed Kathy Griffin at some point in your life, check the index for your name.

Along the way, Kathy reveals intimate details about her life before and after she made the big time. She opens up about everything from growing up with a dysfunctional family in suburban Illinois to bombing as a young comedian in L.A., from her well-publicized plastic surgery disasters to her highly publicized divorce, and more. Only in this book will you learn how the dinner table is the best training ground for a career in stand-up, how speaking your mind can bite you on the ass and buy you a house, and which people in Kathy’s life have taught her the most valuable lessons—both inside and outside the entertainment industry. And as if all that wasn’t enough, there are also dozens of exclusive and somewhat embarrassing photos from Kathy’s own collection—featuring the diva of the D List herself, with her old nose as well as her new one, plus celebrity friends, foes, frenemies, and hangers-on for you to gawk at.

Refreshingly candid, unflinchingly honest, and full of hilarious “Did she really say that?” moments, Official Book Club Selection will make you laugh until you cry, or just puke up a little bit.

Official Book Club Selection: A Memoir According to Kathy Griffin