The Ogre: Biography of a mountain and the dramatic story of the first ascent 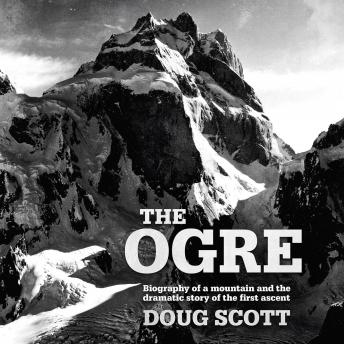 'One of the greatest mountaineering survival stories never told.' – The Sunday Times

On the afternoon of 13 July 1977, having become the first climbers to reach the summit of the Ogre, Doug Scott and Chris Bonington began their long descent. In the minutes that followed, any feeling of success from their achievement would be overwhelmed by the start of a desperate fight for survival. And things would only get worse.

Rising to over 7,000 meters in the center of the Karakoram, the Ogre – Baintha Brakk – is notorious in mountaineering circles as one of the most difficult mountains to climb. First summited by Scott and Bonington in 1977 – on expedition with Paul ‘Tut’ Braithwaite, Nick Estcourt, Clive Rowland and Mo Anthoine – it waited almost twenty-four years for a second ascent, and a further eleven years for a third.

The Ogre, by legendary mountaineer Doug Scott, is a two-part biography of this enigmatic peak: in the first part, Scott has painstakingly researched the geography and history of the mountain; part two is the long overdue and very personal account of his and Bonington’s first ascent and their dramatic week-long descent on which Scott suffered two broken legs and Bonington smashed ribs. Using newly discovered diaries, letters, and audiotapes, it tells of the heroic and selfless roles played by Clive Rowland and Mo Anthoine. When the desperate climbers finally made it back to base camp, they were to find it abandoned – and themselves still a long way from safety.

The Ogre is undoubtedly one of the greatest adventure stories of all time.

Ogre: Biography of a mountain and the dramatic story of the first ascent