Oink: My Life with Minipigs 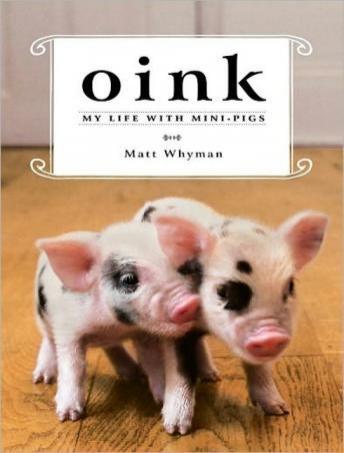 Paris Hilton carries one around like a Chihuahua, while Posh and Becks own a pair. The minipig, for reasons unknown, has become the latest celebrity accessory, but what's it really like to invite little livestock into the living room?

Matt Whyman, a successful novelist, enjoys a quiet writer's life in the English countryside . . . until his career wife, Emma, discovers the existence of a pig said to fit inside a handbag. She believes not one but two would be a perfect addition to the already diverse Whyman clan, which includes one wolf-like dog, a freaked-out feline, and their wild bunch of ex-battery chickens, as well as four challenging children. In reality, nobody could anticipate the trials and misadventures two riotous, raucous little piglets could bring. From turning Whyman's office into a literal pigsty and stealing his spot on the family sofa to trashing his neighbour's garden while drunk on fermented apples, Butch and Roxi swiftly establish themselves as 'animals of mass distraction.'

Funny, touching and endlessly entertaining, Oink charts the battle of hearts, snouts, and minds between a family man and two minipigs. Will Butch and Roxi ever settle down, or could their growing presence put the squeeze on Whyman in ways he never thought possible?

Oink: My Life with Minipigs