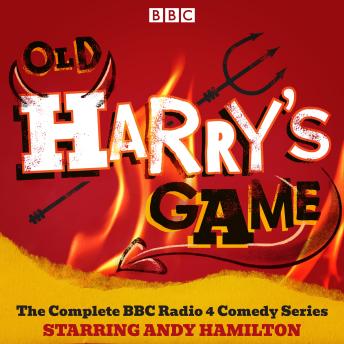 Welcome to Hell - where nobody can ever quite catch the barman's eye. In this collection, which contains all seven series of Old Harry's Game, get ready for some wicked one-liners and scorching satire.

Satan is fed up after a millennia in charge of Hell, especially given the prospect of an eternity still running the damned place. Although he does enjoy playing pranks on the world of the living and devising wry torments for the souls in his keeping, he often wistfully recalls his past as an archangel...

Over the course of the series, we meet various famous figures now languishing in Hell, including a foul-mouthed Jane Austen, a mindless Helen of Troy and a less-than-heroic Samson. Satan takes Hell resident Thomas on a tour of his life, his assistant Scumspawn has trouble with a pushy computer, and love drives The Professor to extreme action. Satan and The Professor find a huge, empty space in Hell (when they enter Scumspawn's brain), a Health and Safety officer notes that the lighting is inadequate, and Satan punishes a feng shui expert. And then Edith arrives...

Seven series of the Sony Award-winning comedy (plus the Christmas and Olympic specials) starring Andy Hamilton as Satan and a regular cast of acclaimed actors including Annette Crosbie as Edith, Timothy West as God, James Grout as The Professor, Jimmy Mulville as Thomas and Robert Duncan as Scumspawn.

This title is due for release on January 19, 2023
We'll send you an email as soon as it is available!