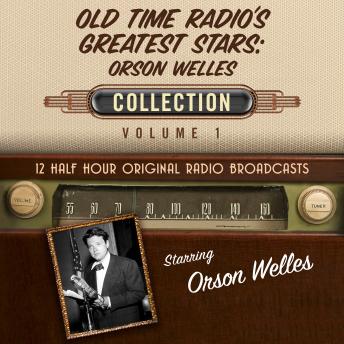 Orson Welles was an actor, director, writer and producer who worked in theatre, radio, TV and film. His film Citizen Kane (1941) is ranked as one of the greatest movies ever made. In 1937, Orson Welles and John Houseman founded the Mercury Theatre, an independent repertory theatre company that presented a series of productions (including Julius Caesar) on Broadway through 1941. To help earn money to stage his productions, Welles moonlighted as a radio actor. In 1937, at age 22, he clouded men’s minds as radio’s first Lamont Cranston, alias The Shadow. In his own radio series, The Mercury Theatre on the Air, Welles dramatized the H.G. Wells science-fiction classic The War of the Worlds and caused widespread panic when listeners thought that Earth was being invaded by Martians. This broadcast earned Orson Welles great notoriety and a film contract with RKO. He followed up Citizen Kane with 12 other feature films, the most acclaimed being The Magnificent Ambersons (1942), Touch of Evil (1958) and Chimes of Midnight (1966). Even though Welles stayed quite busy acting and producing films, he found time to appear in many radio shows during the 1940s and 1950s. We’ve carefully selected 12 of his finest radio performances for this collection and we hope that you will enjoy them!
The Cavalcade of America 10-12-42 “Admiral of the Ocean Sea”
The Jack Benny Program 4-11-43 w/ guest Orson Welles
Suspense 9-23-43 “The Most Dangerous Game”
Suspense 10-19-43 “Lazarus Walks”
Suspense 5-4-44 “The Dark Tower”
The Mercury Summer Theatre 8-2-46 “Golden Honeymoon” & “Romeo and Juliet”
The Mercury Summer Theatre 8-9-46 “Hell on Ice”
The Lives of Harry Lime 4-18-52 “The Painted Smile”
The Lives of Harry Lime 5-16-52 “The Elusive Vermeer”
The Black Museum 1952 “A Lady’s Shoe”
The Black Museum 1952 “The Sash Cord”
The Adv. of Sherlock Holmes 4-17-55 “The Final Problem”