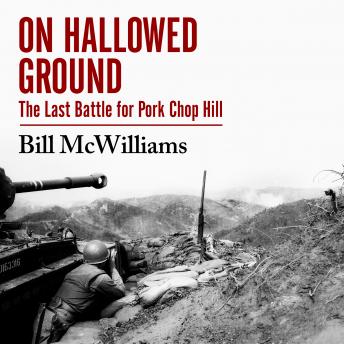 On Hallowed Ground: The Last Battle for Pork Chop Hill

“Brilliantly reveals the extraordinary courage of those who fought the final, bitter, bloody, costly days of the Korean War” (Gen. Jack I. Gregory, USAF Ret.).
By the summer of 1953, the Korean War had long since reached a stalemate. As peace negotiations dragged on, units of the US 7th Infantry Division rebuilt the defenses of Hill 255, one of numerous outposts in front of the Main Line of Resistance extending across the peninsula. Better known by its nickname, Pork Chop Hill, the outpost had twice been the scene of some of the fiercest fighting of the spring. Now, the soldiers tasked with its rebuilding and defense hoped they would not be the last men to die in what had already become known as “the Forgotten War.”
On the night of July 6th, under the cover of a heavy monsoon rainstorm, forces of the Chinese 23rd Army attacked. For five hellish days, the opposing forces engaged in devastating artillery assaults, brutal hand-to-hand fighting, and round-the-clock attacks and counterattacks. Less than three weeks after the smoke on Pork Chop Hill cleared, the Korean Armistice Agreement was signed.
On Hallowed Ground is the riveting story of this epic battle. Drawing on previously classified documents, interviews, and letters from survivors, author Bill McWilliams details the strategy and tactics behind the conflict and pays stirring tribute to the heroic soldiers and medics who were willing to make the ultimate sacrifice to hold “the Chop.”

On Hallowed Ground: The Last Battle for Pork Chop Hill