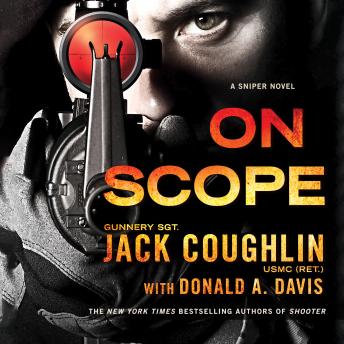 On Scope: A Sniper Novel

Spain is on the brink of economic collapse and European banks demand that any bailout be linked to harsh domestic changes. An alliance of Islamic bankers counters with a rescue package containing no conditions at all. The underlying goal: to break the unity of Europe and put Madrid on the path back to Islamic rule.

When the United States stridently opposes that deal, terrorists storm the American consulate in Barcelona and slaughter an entire six-man U.S. Marine security guard. Washington decides the time has come to change the rules of counter-terrorism response, and instead of going after the individual hired gunmen, it unleashes black operations team Task Force Trident to take down the high-ranking financiers known as the Group of Six who were really responsible for the slaughter. Gunnery Sergeant Kyle Swanson, one of the world's best snipers, and his beautiful sidekick Beth Ledford, go on the attack, and bodies fall from Mallorca to Madrid.

Meanwhile, Algerian mastermind Yanis Rebiane puts pressure on Spain to decide before the Group of Six cracks, while his killing-machine son, Djahid roams the United States, murdering anyone his father deems a threat to the radical Islamic takeover scheme. Once Swanson's name is unearthed from secret files, Kyle and Djahid become hunter and prey. In On Scope by Jack Coughlin and Donald A. Davis, one shot will decide the future of Spain, NATO, and the European Union.