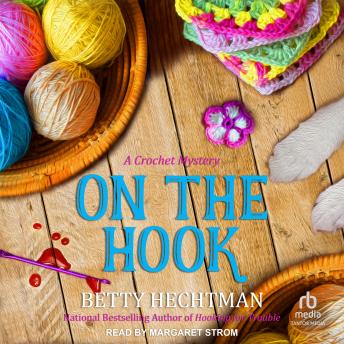 The Tarzana Hookers crochet club could come apart at the seams when thwarted ambition, shady ethics, and a puzzling murder converge.

Molly Pink and the Tarzana Hookers are busy crocheting baby blankets for charity, but before long, they're tangled up in a mystery that may be their unraveling. The Hookers are a tight-knit group, but some of the members harbor secret aspirations. Adele dreams of becoming an actress, and her acting coach has filled her head with promises of a career as a crochet show host. Elise Belmont has earned her real estate license and is itching to show her first house. But when the house's tenant turns up dead from a pink squirrel cocktail laced with cyanide, the Hookers could be in double treble.

It turns out that the dead man was Adele's acting coach, Timothy Clark. And Molly gets wound up in the case after accidentally leaving a scarf she designed at the murder scene. Detective Barry Greenberg, one of Molly's exes, quickly stitches together that the scarf is hers. Lawyer Mason Fields (another of Molly's exes) has her head swimming in legalese. For Molly, the only way out is by learning who really killed Timothy, and why.

This title is due for release on September 27, 2022
We'll send you an email as soon as it is available!