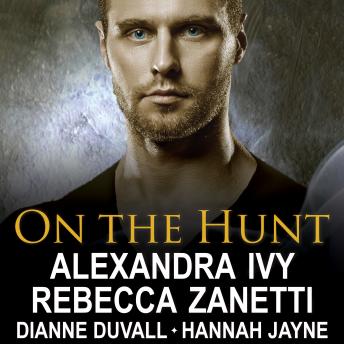 On The Hunt by Alexandra Ivy: Mika Tanner has loved Bailey Morrell, a beautiful Healer, since childhood. But his duty as a Sentinel, a supernatural guardian of an ancient race, clashed with her rebellious spirit. Now a dangerous new anarchist group threatens life as they know it...


Scorpius Rising by Rebecca Zanetti: With a deadly disease spreading like wildfire across the country, microbiologist Nora Medina needs to focus all her energy on stopping the pandemic. She's forced to work with Deacan McDougall, her way-too-hot-ex, against unexpected enemies with the seconds ticking by, she knows the explosion is coming...


Phantom Embrace by Dianne Duvall: Immortal Yuri Sokolov was born with the ability to see spirits, yet he's never seen one as lovely as Cat Seddon, the woman who haunts his home and his dreams. But amid their star-crossed love, a new danger may have Yuri facing a different kind of eternity.


Stake Out by Hannah Jayne: Vampire fashion designer Nina LaShay has a lot on her plate-just two days until fashion week and the model who was flirting with her photographer boyfriend is now a corpse in her studio. But when dead turns into undead and dangerous, Nina must find out who's responsible...before the beautiful baby vamp takes too many bites out of the Big Apple.