On the Occasion of My Last Afternoon 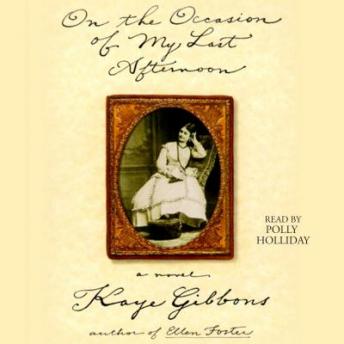 Like America in the mid-nineteenth century, Emma Garnet Tate is a woman at war with herself. Born to privilege on a James River plantation, she grows up increasingly aware that her family's prosperity is inextricably linked to the institution of slavery.

As she tells her story in 1900, she is still prey to her childhood, to the memories of a life that was made bearable in the main by the indomitable family servant Clarice. She secedes from the control of her overbearing father to marry Quincy Lowell, a member of the distinguished Boston family. Living in Raleigh on the eve of the Civil War, Emma Garnet and Quincy, with Clarice's constant help, create the ideal happy home.

When war destroys the rhythm of their days, Emma Garnet works alongside Quincy, an accomplished surgeon. As she assists him in the treatment of wounded soldiers, she comes to see the war as a 'conflict perpetrated by rich men and fought by poor boys against hungry women and babies.' After Appomattox, Emma Garnet sets out to take the exhausted Quincy home to Boston, where she begins the journey of her own reconstruction.

As in her five previous novels, Kaye Gibbons demonstrates her subtle mastery of detail and her unmistakable voice. Told in graceful cadences, On the Occasion of My Last Afternoonis a shimmering meditation on the divisions of the human heart.

On the Occasion of My Last Afternoon

This title is due for release on June 1, 1998
We'll send you an email as soon as it is available!