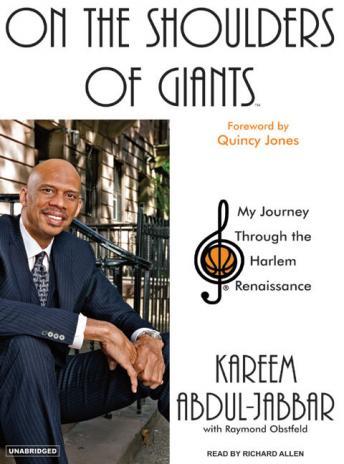 On the Shoulders of Giants: My Journey Through the Harlem Renaissance

From 1920 to 1940, the Harlem Renaissance produced a bright beacon of light that paved the way for African Americans all over the country. The unapologetic writings of W. E. B. Du Bois and Marcus Garvey, the fervent fiction and poetry of Zora Neale Hurston and Langston Hughes, the groundbreaking art of Aaron Douglas and William H. Johnson, and the triumphant music of Duke Ellington and Louis Armstrong gave voice and expression to the thoughts and emotions that Jim Crow segregation laws had long sought to stifle.

In On the Shoulders of Giants, indomitable basketball star and bestselling author and historian Kareem Abdul-Jabbar invites readers on an extraordinarily personal journey back to his birthplace, through one of the greatest political, cultural, literary, and artistic movements in our history, revealing the tremendous impact the Harlem Renaissance had on both American culture and his own life. Beginning with the rise of the Harlem Rens as pioneers of professional basketball, Kareem traces the many streams of historical influence that converged to create the man he is today-the NBA's all-time leading scorer and a veritable African American icon.

Travel deep into the soul of the Renaissance-to the night clubs, restaurants, basketball games, and fabulous parties that have made footprints in Harlem's history. Meet the athletes, jazz musicians, comedians, actors, politicians, entrepreneurs, and writers who not only inspired Kareem's rise to greatness but an entire nation's.

Kareem Abdul-Jabbar was born in the midst of a cultural reawakening, carried on the shoulders of athletes trying to prove there was a lot more at stake than a ball game, men and women who made music that could break your heart, and writers and intellectuals who gave voice to not just the ideals of a movement but the raw emotions. Kareem tells what it took to get these revolutionaries to Harlem and how they changed the world. A world that is still riding on the shoulders of giants.

On the Shoulders of Giants: My Journey Through the Harlem Renaissance

This title is due for release on April 15, 2007
We'll send you an email as soon as it is available!