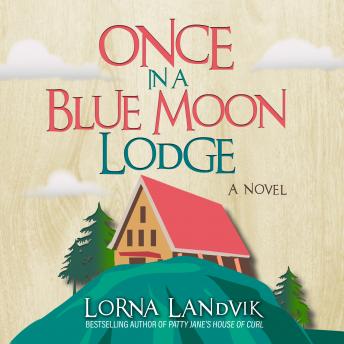 Once In A Blue Moon Lodge: A Novel

Set adrift when her mother sells the salon that has been a neighborhood institution for decades, Nora Rolvaag takes a camping trip, intending to do nothing more than roast marshmallows over an open fire and under a starry sky. Two chance encounters, however, will have enormous consequences, and her getaway turns out to be more of a retreat from her daily life than she ever imagined. But Nora is the do-or-die-trying daughter of Patty Jane, who now must embrace the House of Curl's slogan: 'Expect the Unexpected.'

With her trademark wit and warmth, Lorna Landvik follows Nora and an ever-growing cast of characters between city and wooded retreat, Minnesota and Norway, a past that's secret and a future that's promising, but uncertain. Responding to a mysterious letter with a Norwegian postmark, Nora's grandmother Ione travels to her native land to tend to a dying cousin and her husband-two people who played a painful, pivotal role in her past. Nora accompanies her and is surprised by her grandmother's long-ago love story-but even more surprised by the beginning of her own.

Once In A Blue Moon Lodge: A Novel