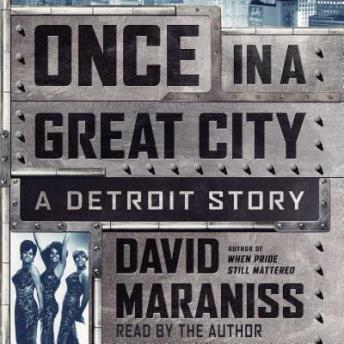 Once In A Great City: A Detroit Story

“A fascinating political, racial, economic, and cultural tapestry” (Detroit Free Press), a tour de force from David Maraniss about the quintessential American city at the top of its game: Detroit in 1963.

Detroit in 1963 is on top of the world. The city’s leaders are among the most visionary in America: Grandson of the first Ford; Henry Ford II; Motown’s founder Berry Gordy; the Reverend C.L. Franklin and his daughter, the incredible Aretha; Governor George Romney, Mormon and Civil Rights advocate; car salesman Lee Iacocca; Police Commissioner George Edwards; Martin Luther King. The time was full of promise. The auto industry was selling more cars than ever before. Yet the shadows of collapse were evident even then.

“Elegiac and richly detailed” (The New York Times), in Once in a Great City David Maraniss shows that before the devastating riot, before the decades of civic corruption and neglect, and white flight; before people trotted out the grab bag of rust belt infirmities and competition from abroad to explain Detroit’s collapse, one could see the signs of a city’s ruin. Detroit at its peak was threatened by its own design. It was being abandoned by the new world economy and by the transfer of American prosperity to the information and service industries. In 1963, as Maraniss captures it with power and affection, Detroit summed up America’s path to prosperity and jazz that was already past history. “Maraniss has written a book about the fall of Detroit, and done it, ingeniously, by writing about Detroit at its height….An encyclopedic account of Detroit in the early sixties, a kind of hymn to what really was a great city” (The New Yorker).

Once In A Great City: A Detroit Story