Once in, Never Out: A Detective Brian McKenna Novel 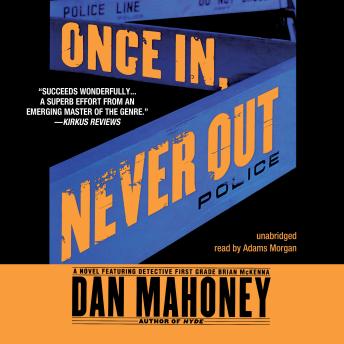 When two bombs kill a British diplomat and his wife in Reykjavik, Thor Erikson, Iceland’s only homicide detective, begins his fifth murder case in twelve years. Then word comes of a woman’s mutilated body, washed up in a distant village.
Meanwhile, NYPD Detective Brian McKenna is on a high-priority search for an Irish-born waitress, Meaghan Maher, whose brother, a priest, is an aid to the Cardinal of the Archdiocese of New York.
McKenna tracks Meaghan to Iceland, but soon is chasing a man with ties to Ireland, the NYPD, and a series of unsolved murders linked with other bombings. Racing from Iceland to Belfast to Dublin and back to New York, McKenna knows the St. Patrick’s Day Parade will be the bomber’s next target—unless McKenna finds him first.

Once in, Never Out: A Detective Brian McKenna Novel