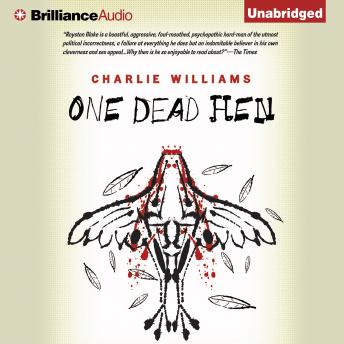 The town of Mangel has always been a rough place, but rough turns to nightmarish when headless corpses begin piling up. The police are desperate for a suspect, and Royston Blake, the former pub doorman-turned-recluse is prime for the taking. He’s hauled in for questioning, but to no avail: this is one crime Blake didn’t commit. Yet the interrogation is enough to shake up his paranoid world. He realizes that, instead of hiding from the ills of the world, he should be fighting them. So begins Blake’s quest to score the unlikeliest of jobs for a guy like him: becoming a copper in Mangel. Considering his violent past, everyone—cops, criminals, even his ex-girlfriend—tries to dissuade him. But Blake’s a tenacious bloke, and what better way to convince the naysayers of his crime-fighting skills than to catch the butcher plaguing his town? As per usual, nothing goes according to plan in Blake’s attempt to turn over a new leaf, leaving him to slog through plenty of blood and muck in the deliciously suspenseful fourth installment of Charlie Williams’s darkly comic series.