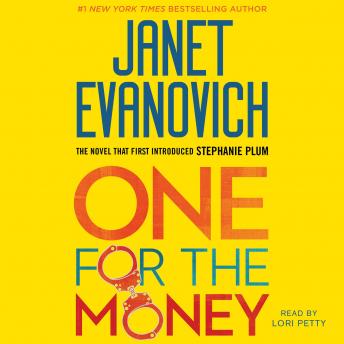 One for the Money: A Stephanie Plum Novel

Meet Stephanie Plum, a bounty hunter with attitude. In Stephanie’s opinion, toxic waste, rabid drivers, armed schizophrenics, and August heat, humidity, and hydrocarbons are all part of the great adventure of living in Jersey.

She’s a product of the “burg,” a blue-collar pocket of Trenton where houses are attached and narrow, cars are American, windows are clean, and (God forbid you should be late) dinner is served at six.

Out of work and out of money, Stephanie blackmails her bail-bondsman cousin Vinnie into giving her a try as an apprehension agent. Stephanie knows zilch about the job requirements, but she figures her new pal, el-primo bounty hunter Ranger, can teach her what it takes to catch a crook. Her first assignment: nail Joe Morelli, a former vice cop on the run from a charge of murder one. Morelli’s the inamorato who charmed Stephanie out of her virginity at age sixteen. There’s still powerful chemistry between them, so the chase should be interesting…and could also be extremely dangerous.

One for the Money: A Stephanie Plum Novel