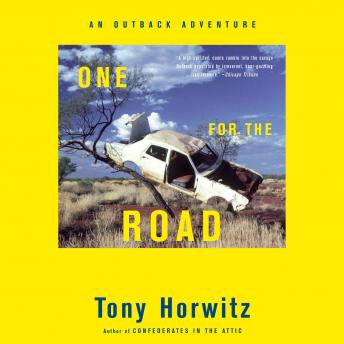 One for the Road: An Outback Adventure

"A fascinating insight into what we're all about on the highways and byways along the outback track." --The Telegraph (Sydney)

Swept off to live in Sydney by his Australian bride, American writer Tony Horwitz longs to explore the exotic reaches of his adopted land. So one day, armed only with a backpack and fantasies of the open road, he hitchhikes off into the awesome emptiness of Australia's outback.
What follows is a hilarious, hair-raising ride into the hot red center of a continent so desolate that civilization dwindles to a gas pump and a pub. While the outback's terrain is inhospitable, its scattered inhabitants are anything but. Horwitz entrusts himself to Aborigines, opal diggers, jackeroos, card sharks, and sunstruck wanderers who measure distance in the number of beers consumed en route. Along the way, Horwitz discovers that the outback is as treacherous as it is colorful. Bug-bitten, sunblasted, dust-choked, and bloodied by a near-fatal accident, Horwitz endures seven thousand miles of the world's most forbidding real estate, and some very bizarre personal encounters, as he winds his way to Queensland, Alice Springs, Perth, Darwin--and a hundred bush pubs in between.
Horwitz, the Pulitzer Prize-winning author of two national bestsellers, Confederates in the Attic and Baghdad Without a Map, is the ideal tour guide for anyone who has ever dreamed of a genuine Australian adventure.

"Ironical, perceptive and subtle . . . will have readers getting out their maps and itching to follow Horwitz's tracks. . . . The internal journey is his finest achievement; he allows the reader into his heart, to go travelling with him there, sharing his adventures of the spirit." --Sunday Times (London)

One for the Road: An Outback Adventure