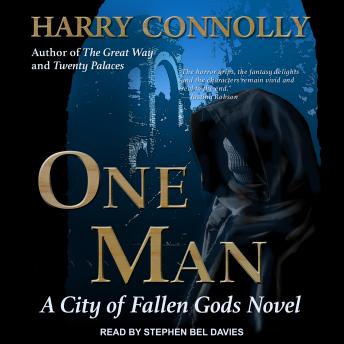 One Man: A City of Fallen Gods Novel

As a child, Kyrioc was groomed to be the head of one of the most powerful noble families in Koh-Salash, a city built inside the skeletons of two murdered gods. Kyrioc himself dreamed of becoming head of the High Watch, the highest political position in the land.

Those dreams have turned to dust.

Presumed dead after a disastrous overseas quest, Kyrioc now lives in a downcity slum under a false name, hiding behind the bars of a pawnshop window. Riliska, a nine-year-old pickpocket who sells stolen trinkets to his shop, is the closest thing he has to a friend.

When a criminal gang kills Riliska's mother and kidnaps the little girl, Kyrioc goes hunting for her.

In a raging city on the verge of civil war, Kyrioc only wants to save his friend. He will risk anything for her, even awakening the powers that murdered the gods so long ago.

One Man: A City of Fallen Gods Novel