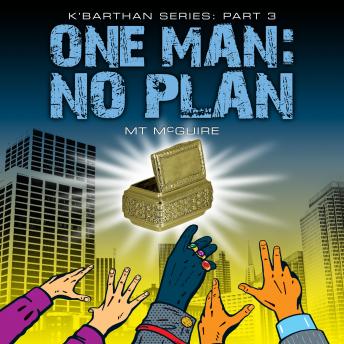 One Man: No Plan

The Pan of Hamgee needs answers, although he’s not even sure he knows the questions.

He has a chance to go straight but it’s been so long that he’s almost forgotten how. Despite a death warrant over his head he is released, given a state-sponsored business, and a year’s amnesty for all misdemeanours while he adjusts. On the down side, Ruth has left him for his nemesis, Lord Vernon.

The Pan doesn’t have a year, either. In only five days Lord Vernon will gain total power and destroy K'Barth. Unless The Pan can stop him. Because even though the Candidate, the person prophesied to save K'Barth, has finally appeared it's still going to be down to The Pan to make things right. But he has no clue where to start or whether he even can.

The future hangs by a thread and the only person who can fix it is The Pan: a man without a plan.

A WORD WITH THE AUTHOR

What made you write the K'Barthan Series? Why is it special?

You know the saying: that if the book you want doesn't exist you must write it? That. I love funny British authors, comedic sci fi, epic fantasy, adventure, action, humour - or humor. Misfit characters are great, the weirder the better and an evil baddie. I like genre fiction mashups: alien races, flying cars, car chases, static powered laser guns. Dr Who meets Terry Pratchett. K'Barth is kind of first contact, only not. There are quirky characters, from 6ft Swamp Things with antennae to cute furry Blurpons with fluffy ears, button eyes and love of extreme violence. But the eternal questions they face mirror ours.

There's also a 30min prequel, Unlucky Dip, which is free if you join my mailing list: https://www.hamgee.co.uk/audioud.html

One Man: No Plan