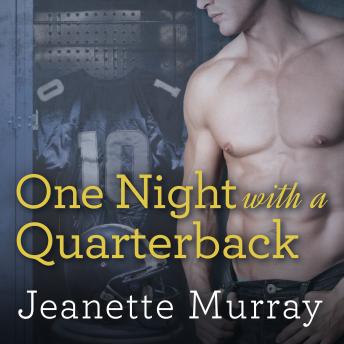 One Night with a Quarterback

Cassie Wainwright thought that her father-head coach of the Santa Fe Bobcats-ignored her purposefully. Come to find out, he had no clue that she'd ever been born.
Now Cassie is determined to meet the man who's always been missing from her life. Her mother warns her that being the long-lost daughter of a well-known NFL coach won't be easy, but Cassie's determined to stick it out-and before her life turns upside down, she wants one more night of fun.
Starting quarterback for the Santa Fe Bobcats Trey Owens is tired of being in the limelight. Lucky for him, the beautiful brunette he meets at the club isn't a local. She has no idea who he is, and she's down to party.
Tomorrow, Cassie will think about her father. Tomorrow, she'll think about her future-but tonight is for herself and the hottie she found on the dance floor. It's a match made in heaven, if only for a night . . .Contains mature themes.

One Night with a Quarterback