The One Percent Doctrine: Deep Inside America's Pursuit of Its Enemies Since 9/11 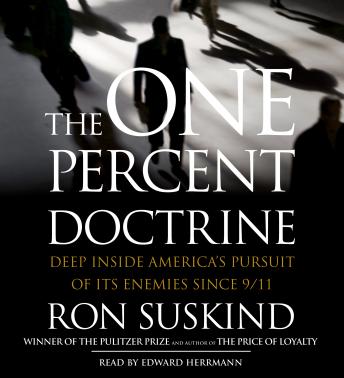 Pulitzer Prize-winning journalist and bestselling author Ron Suskind takes you deep inside America's real battles with violent, unrelenting terrorists—a game of kill-or-be-killed, from the Oval Office to the streets of Karachi.

Ron Suskind takes readers inside the defining conflict of our era: the war between the West and a growing, shadowy army of terrorists, armed with weapons of alarming power.

Relying on unique access to former and current government officials, this book will reveal for the first time how the US government—from President Bush on down—is frantically improvising to fight a new kind of war. Where is the enemy? What have been the real victories and defeats since 9/11? How are we actually fighting this war and how can it possibly be won?

Filled with astonishing disclosures, Suskind's book shows readers what he calls 'the invisible battlefield'— a global matrix where US spies race to catch soldiers of jihad before they strike. It is a real-life spy thriller with the world's future at stake. It also reveals the shocking and secret philosophy underpinning the war on terror. Gripping and alarming in equal measure, it will reframe the debate about a war that, each day, redefines America and its place in the world.

One Percent Doctrine: Deep Inside America's Pursuit of Its Enemies Since 9/11

This title is due for release on June 20, 2006
We'll send you an email as soon as it is available!