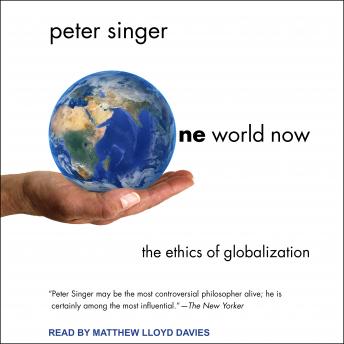 One World Now: The Ethics of Globalization

One World Now seamlessly integrates major developments of the past decade into Peter Singer's classic text on the ethics of globalization, One World. Singer, often described as the world's most influential philosopher, here addresses such essential concerns as climate change, economic globalization, foreign aid, human rights, immigration, and the responsibility to protect people from genocide and crimes against humanity, whatever country they may be in. Every issue is considered from an ethical perspective. This thoughtful and important study poses bold challenges to narrow nationalistic views and offers valuable alternatives to the state-centric approach that continues to dominate ethics and international theory. Singer argues powerfully that we cannot solve the world's problems at a national level, and shows how we should build on developments that are already transcending national differences. This is an instructive and necessary work that confronts head-on both the perils and the potentials inherent in globalization.

One World Now: The Ethics of Globalization