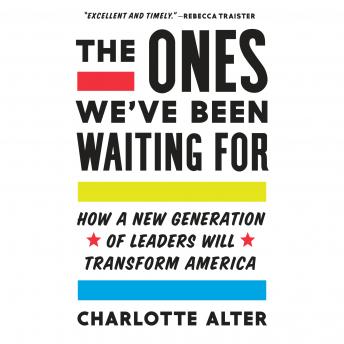 The Ones We've Been Waiting For: How a New Generation of Leaders Will Transform America

A new generation is stepping up. There are now twenty-six millennials in Congress--a fivefold increase gained in the 2018 midterms alone. They are governing Midwestern cities and college towns, running for city councils, and serving in state legislatures. They are acting urgently on climate change (because they are going to live it); they care deeply about student debt (because they have it); they are utilizing big tech but still want to regulate it (because they understand how it works). In The Ones We've Been Waiting For, TIME correspondent Charlotte Alter defines the class of young leaders who are remaking the nation--how grappling with 9/11 as teens, serving in Iraq and Afghanistan, occupying Wall Street and protesting with Black Lives Matter, and shouldering their way into a financially rigged political system has shaped the people who will govern the future.

Through the experiences of millennial leaders--from progressive firebrand Alexandria Ocasio-Cortez to Democratic presidential hopeful Pete Buttigieg to Republican up-and-comer Elise Stefanik--Charlotte Alter gives the big-picture look at how this generation governs differently than their elders, and how they may drag us out of our current political despair. Millennials have already revolutionized technology, commerce, and media and have powered the major social movements of our time. Now government is ripe for disruption. The Ones We've Been Waiting For is a hopeful glimpse into a bright new generation of political leaders, and what America might look like when they are in charge.

Ones We've Been Waiting For: How a New Generation of Leaders Will Transform America