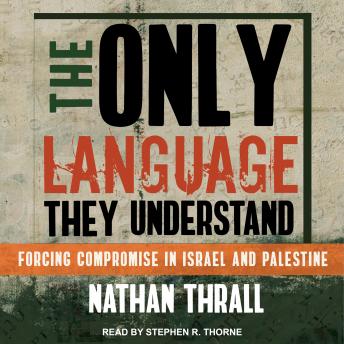 The Only Language They Understand: Forcing Compromise in Israel and Palestine

Scattered over the territory between the Jordan River and the Mediterranean Sea lie the remnants of failed peace proposals, international summits, secret negotiations, UN resolutions, and state-building efforts. The conventional story is that these well-meaning attempts at peacemaking were repeatedly, perhaps terminally, thwarted by violence.

Through a rich interweaving of reportage, historical narrative, and powerful analysis, Nathan Thrall presents a startling counter-history. He shows that force has impelled each side to make its largest concessions, from Palestinian acceptance of a two-state solution to Israeli territorial withdrawals. This simple fact has been neglected by the world powers, which have expended countless resources on initiatives meant to diminish friction between the parties. By quashing any hint of confrontation and providing bounteous economic and military assistance, the United States and Europe have merely entrenched the conflict by lessening the incentives to end it. Thrall's important book upends the beliefs steering these failed policies, revealing how the aversion of pain, not the promise of peace, has driven compromise for Israelis and Palestinians alike.

Only Language They Understand: Forcing Compromise in Israel and Palestine