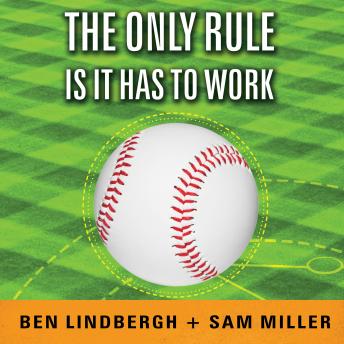 The Only Rule Is It Has to Work: Our Wild Experiment Building a New Kind of Baseball Team

It's the ultimate in fantasy baseball: You get to pick the roster, set the lineup, and decide on strategies-with real players, in a real ballpark, in a real playoff race. That's what baseball analysts Ben Lindbergh and Sam Miller got to do when an independent minor-league team in California, the Sonoma Stompers, offered them the chance to run its baseball operations according to the most advanced statistics.

We tag along as Lindbergh and Miller apply their number-crunching insights to all aspects of assembling and running a team, following one cardinal rule for judging each innovation they try: it has to work. We meet colorful figures like general manager Theo Fightmaster and boundary-breakers like the first openly gay player in professional baseball. Even Jose Canseco makes a cameo appearance.

Will their knowledge of numbers help Lindbergh and Miller bring the Stompers a championship, or will they fall on their faces? Will the team have a competitive advantage or is the sport's folk wisdom true after all? Will the players attract the attention of big-league scouts, or are they on a fast track to oblivion?

Only Rule Is It Has to Work: Our Wild Experiment Building a New Kind of Baseball Team