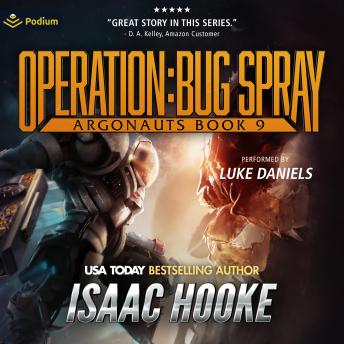 'One man’s fight to save his family, and an entire world, from total destruction.


Rade and the Argonauts hunt a fugitive alien to a colonized world. Embedded within the most populous city, the rogue is hidden in plain sight.


Unable to obtain clearance from the local authorities, Rade and his team must sneak inside the city and quietly capture the rogue without alerting law enforcement.


The operation won’t be easy. The city’s security forces have drones and mechs watching on every street corner, and the alien fugitive himself is known for his cunning, resourcefulness, and cruelty. But Rade has considered every possible scenario, planned for every eventuality. The operation won’t fail.


Unfortunately, the alien has an unexpected surprise waiting for the team. One that not even all of Rade’s careful planning and ingenuity can account for. It will put his family and crew in grave danger.


Not to mention a billion innocent lives.


Talk about a rough day at work.


Welcome to Operation: Bug Spray, where just when you think you know what’s going to happen next, the universe throws you a curveball.