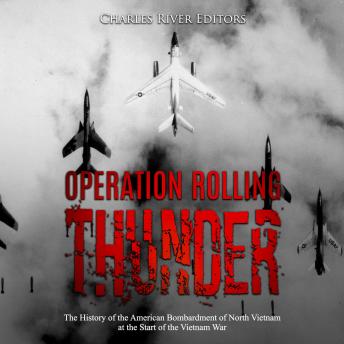 Operation Rolling Thunder: The History of the American Bombardment of North Vietnam at the Start of the Vietnam War

The seeds of Operation Rolling Thunder, America's elaborately constrained air war against North Vietnam, appeared almost from the first moment that the USA inherited the conflict from the French. The half-communist, half-nationalist Viet Minh rebels of Ho Chi Minh evicted the French in 1954, but not before the latter partially created an anticommunist state, South Vietnam, in the lower half of the nation. Home to many Vietnamese who stood to lose property and potentially their lives in the event of the country's reunification, the new state struggled with both Viet Cong guerrillas supplied by the north and its own internal corruption and factionalism. Many thousands of North Vietnamese fled there to escape Ho Chi Minh's repression and occasional mass executions as well.
Faced with such a determined opponent, skilled in asymmetrical warfare and enjoying considerable popular support, the Americans would ultimately choose to fight a war of attrition. While the Americans did employ strategic hamlets, pacification programs, and other kinetic counterinsurgency operations, they largely relied on a massive advantage in firepower to overwhelm and grind down the Viet Cong and NVA in South Vietnam. The goal was simple: to reach a "crossover point" at which communist fighters were being killed more quickly than they could be replaced. American ground forces would lure the enemy into the open, where they would be destroyed by a combination of artillery and air strikes.
Naturally, if American soldiers on the ground often had trouble distinguishing combatants from civilians, B-52 bombers flying at up to 30,000 feet were wholly indiscriminate when targeting entire villages. By the end of 1966, American bombers and fighter-bombers in Vietnam dropped about 825 tons of explosive every day, more than all the bombs dropped on Europe during World War II.

Operation Rolling Thunder: The History of the American Bombardment of North Vietnam at the Start of the Vietnam War

This title is due for release on August 31, 2019
We'll send you an email as soon as it is available!