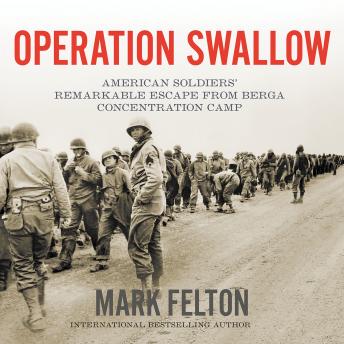 The true and heroic story of American POWs' daring escape from a Nazi concentration camp.In this little-known story from World War II, a group of American POW camp leaders risk everything to save hundreds of fellow servicemen from a diabolical Nazi concentration camp. Their story begins in the dark forests of the Ardennes during Christmas 1944 and ends at the Buchenwald Concentration Camp in the spring of 1945. This appalling chapter of US military history and uplifting Holocaust story deserves to be widely known and understood.Operation Swallow provides a historical, first person perspective of how American GIs stood up against their evil SS captors who were forcing them to work as slave laborers. A young GI is thrust into a leadership position and leads his fellow servicemen on a daring escape. It is a story filled with courage, sacrifice, torture, despair, and salvation. A compelling narrative-driven nonfiction book has not been written that takes the reader deep into the dark story of Operation 'Swallow' and Berga Concentration Camp--until now.Written from personal testimonies and official documents, Operation Swallow is a tale replete with high adventure, compelling characters, human drama, tragedy, and eventual salvation, from the pen of a master of the modern military narrative.