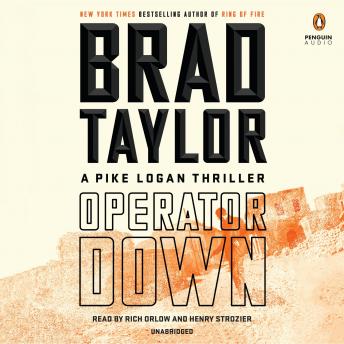 Operator Down: A Pike Logan Thriller

• A New York Times Bestseller • Former Special Forces Officer and New York Times bestselling author Brad Taylor delivers a heart-pounding thriller where Pike Logan's search for a Mossad agent and ally puts him on a collision course with a ruthless military coup in Africa—and tests his loyalties to the Taskforce.

It was to be a simple mission. Nothing more than assessing whether a merchant in the fabled Israeli Diamond Exchange was involved in a scheme that could potentially embarrass the state of Israel. But nothing is ever simple in the world of intelligence, as Aaron Bergman—a former leader of an elite direct action team under the Mossad—should have known. Executing the operation as a contractor, a cutout that gave the State of Israel plausible deniability, he disappears without a trace.

Pike Logan and his team know none of this, but he’s tracking an American arms dealer in Tel Aviv who may—or may not—be attempting to sell sensitive nuclear weapons components to the highest bidder. When Pike’s team breaks up an attempt at killing Shoshana, Aaron’s partner, they stumble upon much more than they expected—a concerted conspiracy to topple a democratic African country.

Beginning to untangle a web that extends through both the American and Israeli intelligence community, Pike is forced to choose between his Israeli friends and his Taskforce mission, even as the execution of the coup begins to form. At the heart of it is Aaron, and his disappearance is the one mistake the plotters made. Because Shoshana is the greatest killing machine the Mossad has ever produced, and she will stop at nothing to help Aaron, even if it means killing Pike Logan.

Operator Down: A Pike Logan Thriller