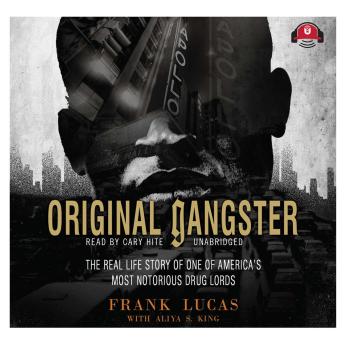 Original Gangster: The Real Life Story of One of America’s Most Notorious Drug Lords

In his own words, real-life American gangster Frank Lucas recounts his life as the former heroin dealer and organized crime boss who ran Harlem during the late 1960s and early 1970s. Determined to break the Italian Mafia's monopoly over drug smuggling in New York, Frank cut out middlemen and began smuggling heroin into the United States directly from his source in Vietnam using the coffins of dead American soldiers. Making a million dollars per day from his 'Blue Magic,' the purest heroin on the street, Frank Lucas became one of the most powerful crime lords of his time, while rubbing shoulders with the elite in entertainment, politics, and crime. This powerful memoir reveals what really happened to the man whose rise and fall was dramatized in the 2007 feature filmAmerican Gangster, exposing a startling look at the world of organized crime.

A great listen, only wish it were longer. The narrator needs work though, i feel like his talent agent maybe called in a favor to get him the job.