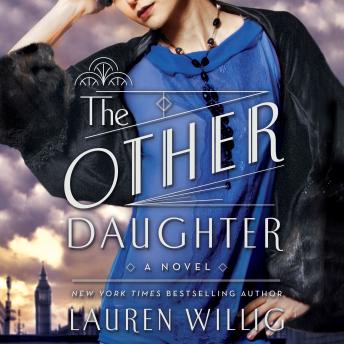 The Other Daughter: A Novel

Raised in a poor yet genteel household, Rachel Woodley is working in France as a governess when she receives news that her mother has died suddenly. Grief-stricken, she returns to the small town in England where she was raised to clear out the cottage...and finds a cutting from a London society magazine, with a photograph of her supposedly deceased father dated all of three months before. He's an earl, respected and influential, and he is standing with another daughter -- his legitimate daughter. Which makes Rachel...not legitimate. Everything she thought she knew about herself and her past -- even her very name -- is a lie.

Still reeling from the death of her mother, and furious at this betrayal, Rachel sets herself up in London under a new identity. There she insinuates herself into the party-going crowd of Bright Young Things, with a steely determination to unveil her father's perfidy and bring his -- and her half-sister's -- charmed world crashing down. Very soon, however, Rachel faces two unexpected snags: she finds that she genuinely likes her half-sister, Olivia, whose situation isn't as simple it appears; and that she might just be falling for her sister's fiancé...

From Lauren Willig, author of the New York Times bestselling novel The Ashford Affair, comes The Other Daughter, a page-turner full of deceit, passion, and revenge.

Light and charming. The love story a bit predictable, but the reveal adds just enough spice to make it worthwhile.