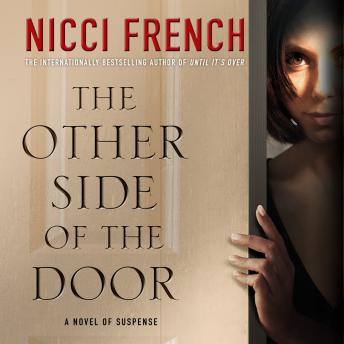 The Other Side of the Door

Bonnie Graham stands in the open door of her friend’s apartment. She is alone, except for the dead body lying in a pool of blood on the floor. What happened? What will Bonnie do now? Whom can she turn to? And what role has she played in the murderous events?
Bonnie is a music teacher who has spent a long, hot summer in London rehearsing with a band to play at a friend’s wedding. It was supposed to be fun, but the band members find the complicated knots of their friendships – some old, some new – unraveling as the days themselves unwind. What was meant to be a summer of happiness, love, and music turns deadly as lovers betray one another, passions turn murderous, and friendship itself becomes a crime. Everyone tells lies. But is anyone prepared to tell the truth to uncover a murderer?
Nicci French, the author of eleven internationally bestselling novels including Killing Me Softly, Catch Me When I Fall, and Losing You, delivers a sexy, intricate thriller about the temptation of secrets, the weight of lies, and the price of betrayal and suspicion.

Other Side of the Door