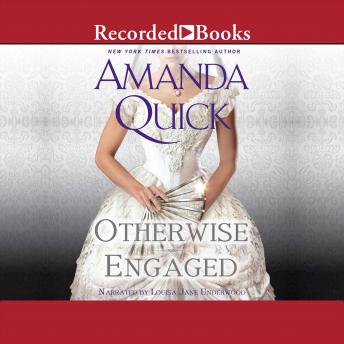 Miss Amity Doncaster, world traveler, is accustomed to adventure and risk. Benedict Stanbridge, a man of science and a spy for the Crown, has faced danger in the darker corners of foreign lands. But they are about to face a threat that is shockingly close to home. One does not expect to be kidnapped on a London street in broad daylight. But Amity Doncaster barely escapes with her life after she is trapped in a carriage with a blade-wielding man in a black silk mask who whispers the most vile taunts and threats into her ear. Her quick thinking, and her secret weapon, save her, for now. But the monster known in the press as the Bridegroom, who has left a trail of female victims in his wake, has survived the wounds she inflicts and will soon be on his feet again. He is unwholesomely obsessed by her scandalous connection to Benedict Stanbridge-gossip about their hours alone in a ship's stateroom seems to have crossed the Atlantic faster than any sailing vessel could. Benedict refuses to let this resourceful, daring woman suffer for her romantic link to him-as tenuous as it may be. For a man and woman so skilled at disappearing, so at home in the exotic reaches of the globe, escape is always an option. But each intends to end the Bridegroom's reign of terror in London, and will join forces to do so. And as they prepare to confront an unbalanced criminal in the heart of the city they love, they must also face feelings that neither of them can run away from.