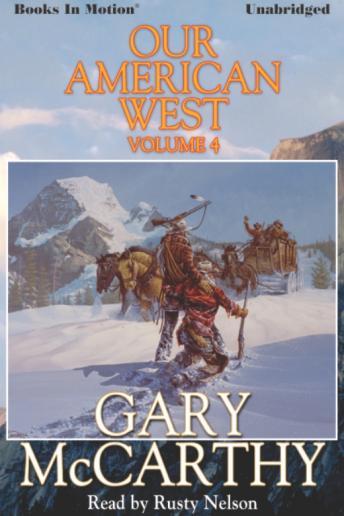 Our American West, Volume 4 completes this collection of stories written by Gary McCarthy. The Lewis and Clark Expedition proved once and for all that the storied and hoped for "River across America" didn't exist. Long before the Forty-Niner Gold Rush a diminutive but courageous priest named Fr. Junipero Serra sacrificed everything to bring Christianity to the gentle coastal Native Americans while faithfully establishing a string of beautiful California missions. Old Time Snake Oil Peddlers and Con Men were artists of deceit, trying to peddle elixirs and cures without liberal doses of alcohol. The First Hollywood Cowboys takes us back to B-grade movies and stars like William S. Hart, Bob Steel, Hoot Gibson, Hopalong Cassidy, Roy Rogers and Gene Autry. Visit the Custer Battlefield, which reminds us that foolish pride and ambition can lead to tragedy. Jesse James and Sam Bass fear the famed Texas Rangers while Wyatt Earp and His Deadly Brothers had a reputation for being fast and deadly with a sixgun. From the First Mountain Men to the great Texas Longhorn drives and on to the visionary naturalist John Muir who advocated the National Park system after falling in love with Yosemite.