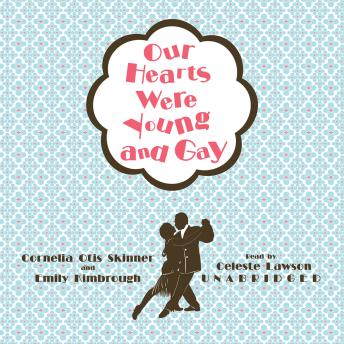 Our Hearts Were Young and Gay: An Unforgettable Comic Chronicle of Innocents Abroad in the 1920s

'To know Emily is to enhance one's days with gaiety, charm and occasional terror.'-Cornelia Otis Skinner of her coauthor, Emily Kimbrough

Actress Cornelia Otis Skinner and journalist Emily Kimbrough offer a lighthearted, hilarious memoir of their European tour in the 1920s, when they were fresh out of college from Bryn Mawr. Some of the more amusing anecdotes involve a pair of rabbit-skin capes that begin shedding at the most inopportune moments and an episode in which the girls are stranded atop Notre Dame cathedral at midnight. And, of course, there's romance, in the form of handsome young doctor Tom Newhall and college 'Lothario' Avery Moore. Published in 1942, the book spent five weeks at the top of the New York Times bestseller list in the winter of 1943 and was made into a motion picture in 1944.

Our Hearts Were Young and Gay: An Unforgettable Comic Chronicle of Innocents Abroad in the 1920s