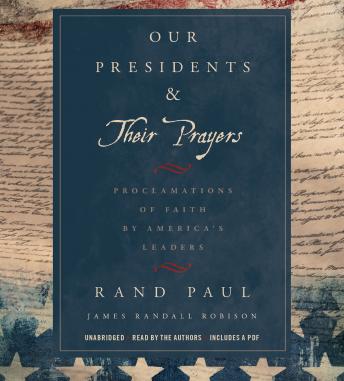 Our Presidents & Their Prayers: Proclamations of Faith by America's Leaders

What is the single most important common thread that unites all American Presidents - such a small number of extraordinary people from different centuries, parties, backgrounds and experiences - as they shoulder the overwhelming responsibilities of the office of President of the United States? There is only one possible answer: their faith.
As a respected national leader and a man of deep faith himself, Senator Rand Paul has written OUR PRESIDENTS & THEIR PRAYERS in collaboration with James Randall Robison to remind us all that in a country founded by religious people, that abiding and rock-solid belief in God has been the key to each and every president's strength.
Senator Paul's inspiring look into the heart-felt sentiments and personal prayers of leaders past and present becomes a powerful testament to our incredible accomplishments: winning the Revolution, writing the Constitution, and leading the world as the most exceptional and longest-lasting democracy in history.
It's nothing short of a miracle, then and now.
Every man who has answered the people's call to become President has looked for and found answers in his faith as he faced the nation's problems, and each president has frequently described his reliance on the Creator in his public speeches, official proclamations and private prayers.
Join Senator Paul in applauding the important role faith has played in our country through over 225 years of triumphs and struggles, justice and injustice, accomplishments and setbacks, war and peace.
In OUR PRESIDENTS & THEIR PRAYERS, Senator Paul stands up to the doubters in this most timely and important affirmation of how faith and prayer have always guided us, and why they must continue to do so as we face major decisions for the future of our country.

Our Presidents & Their Prayers: Proclamations of Faith by America's Leaders