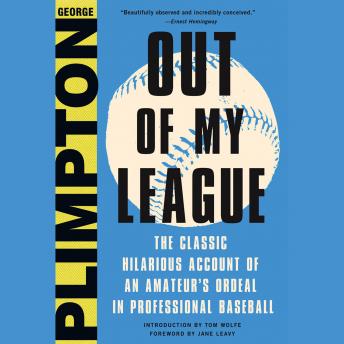 Out of My League: The Classic Hilarious Account of an Amateur's Ordeal in Professional Baseball

This baseball classic that Ernest Hemingway called 'beautifully observed and incredibly conceived' includes a foreword from Jane Leavy and never-before-seen content from the Plimpton archives.

The first of Plimpton's remarkable forays into participatory journalism, Out of My League chronicles with wit, charm, and grace what happens when a self-professed amateur has the chance to answer every fan's question: could he strike out a major league star?

Plimpton's inspired idea -- to get on the mound and pitch a few innings to the All-Stars of the American and National Leagues -- begins as a fun-filled stunt and comes to a deeply hellish, nearly humiliating end. This honest and hilarious tale features Mickey Mantle, Willie Mays, Whitey Ford, Ralph Houk, and other baseball greats and is 'a baseball book such as no one else ever wrote, and one of the best ever.'-New York Herald Tribune

Out of My League: The Classic Hilarious Account of an Amateur's Ordeal in Professional Baseball