Out of the Hitler Time: When Hitler Stole Pink Rabbit, Bombs on Aunt Dainty, A Small Person Far Away: BBC Radio 4 dramatisations of the complete trilogy 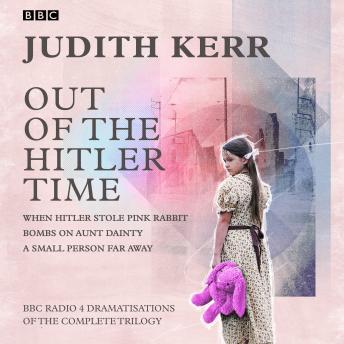 The BBC radio adaptations of Judith Kerr's internationally acclaimed trilogy - plus bonus documentary
Based on her own childhood experiences, Judith Kerr's When Hitler Stole Pink Rabbit is a timeless classic loved by children and adults alike. By turns heart-rending and heart-lifting, it is even more resonant today than when it was first published in 1971. This story of a Jewish family who escape Germany just as the Nazis come to power is seen through the eyes of their young daughter Anna, and traces their perilous journey - splintered by conflict, driven by fear and eventually rewarded with reunion. The two sequels, Bombs on Aunt Dainty and A Small Person Far Away, follow Anna as she grows up, settles in London - and, many years later, returns to Berlin to confront the past.

These three radio plays are the very first dramatisations of Kerr's trilogy, and feature a stunning cast including Anna Madeley, Paul Moriarty and Adjoa Andoh. Also featured is a bonus edition of World Book Club, in which Harriett Gilbert talks to Judith Kerr about her life and work.

When Hitler Stole Pink Rabbit
1933. Leaving her beloved Pink Rabbit behind, nine-year-old Anna leaves her Berlin home to flee with her family across the Swiss border. As they cross Europe in search of sanctuary, she quickly adapts to being a refugee - but will she ever feel she belongs anywhere?
Bombs on Aunt Dainty

1940. Teenage Anna is enjoying her new life in London, and looking forward to embarking on a secretarial course. But then her brother Max is interned as an enemy alien - and as the Blitz begins in earnest, she fears for the future of her family.
A Small Person Far Away

1956. Happily married and living in West London, Anna gets a worrying telegram. Her mother, who has been living back in Berlin for seven years, has pneumonia, and Anna must go to her at once. With the Cold War heating up, can Anna bear to return to the city of her birth?
World Book Club: Judith Kerr - When Hitler Stole Pink Rabbit
The German-born author talks to Harriet Gilbert about her much-loved novel, answering questions from the audience about writing from a child's perspective, assimilating into British society, and staying happy despite the hardships she endured.

Out of the Hitler Time: When Hitler Stole Pink Rabbit, Bombs on Aunt Dainty, A Small Person Far Away: BBC Radio 4 dramatisations of the complete trilogy