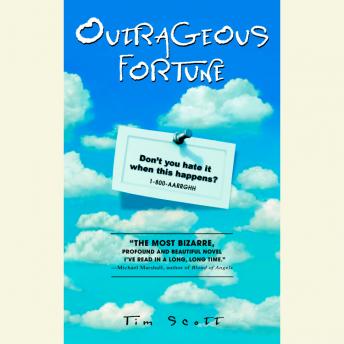 In this outrageously funny, outrageously inventive debut, one of the most outrageously talented new writers to break onto the sci-fi scene in decades asks the most loaded question of all . . .

“Don’t you hate it when this happens?”

. . . that’s what the business card asks Jonny X67, dream architect to the rich and jaded. It’s all the thieves who stole his house left behind. And if that weren’t bad enough, a saleswoman named Caroline E61 drops from the sky to sell him a set of encyclopedias and won’t take no for an answer. Can his luck get any worse?

In this rip-roaring roller-coaster ride through a brilliantly imagined future of paranoid absurdity, Jonny X will learn the answer soon enough when he falls afoul of a lunatic motorcycle gang nicknamed the Four Horsemen of the Apocalypse, a relentless Belgian assassin, and his own irate girlfriend. Traversing a cityscape whose neighborhoods are organized by musical genres, running into joke-telling elevators and holographic computer viruses, Jonny is about to learn what a nightmare it’s going to be to get his old life back in a reality warping faster than the speed of the imagination. Outrageous Fortune heralds a marvelous new talent sure to be delightfully altering the minds of readers for years to come.