The Outsider: My Life in Intrigue 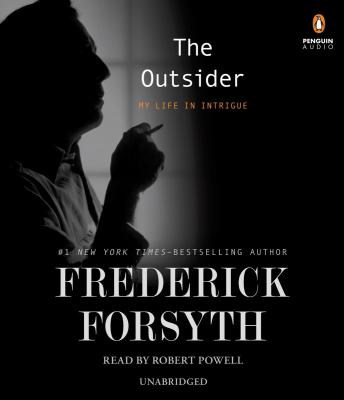 From Frederick Forsyth, the grand master of international suspense, comes his most intriguing story ever—his own.


For more than forty years, Frederick Forsyth has been writing extraordinary real-world novels of intrigue, from the groundbreaking The Day of the Jackal to the prescient The Kill List. Whether writing about the murky world of arms dealers, the shadowy Nazi underground movement, or the intricacies of worldwide drug cartels, every plot has been chillingly plausible because every detail has been minutely researched.

But what most people don’t know is that some of his greatest stories of intrigue have been in his own life.

He was the RAF’s youngest pilot at the age of nineteen, barely escaped the wrath of an arms dealer in Hamburg, got strafed by a MiG during the Nigerian civil war, landed during a bloody coup in Guinea-Bissau (and was accused of helping fund a 1973 coup in Equatorial Guinea). The Stasi arrested him, the Israelis feted him, the IRA threatened him, and a certain attractive Czech secret police agent—well, her actions were a bit more intimate. And that’s just for starters.
It is a memoir like no other—and a book of pure delight.

Outsider: My Life in Intrigue