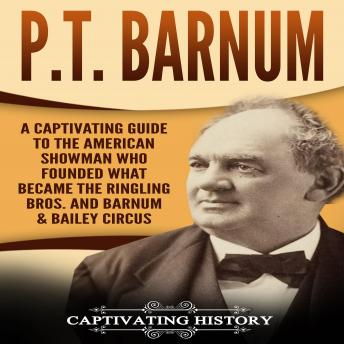 P.T. Barnum: A Captivating Guide to the American Showman Who Founded What Became the Ringling Bros. and Barnum & Bailey Circus

He wasn't always the Great Showman. In fact, Phineas Taylor Barnum grew up in relative poverty with only his wits to help him along. When his father died, the 15-year-old boy entered the working world as a shopkeeper's assistant. In leaps and bounds, he worked his way from assistant to shop owner, lottery office owner, and, eventually, entertainment promoter. The bulk of his career was focused on his beloved American Museum, where thousands of ticket holders flocked every day to look at the human oddities, stuffed animals, live whale, and American memorabilia. In the Barnum and Bailey Circus, we see the culmination of the renowned man's life's work.

Get the audiobook now to learn more about P. T. Barnum!

P.T. Barnum: A Captivating Guide to the American Showman Who Founded What Became the Ringling Bros. and Barnum & Bailey Circus

This title is due for release on June 21, 2018
We'll send you an email as soon as it is available!