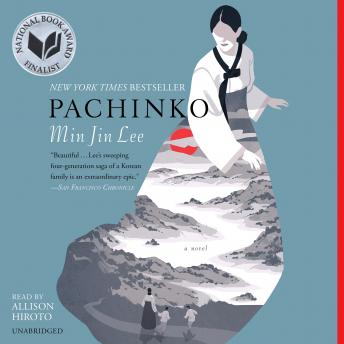 A New York Times Top Ten Book of the Year and National Book Award finalist, Pachinko is an 'extraordinary epic' of four generations of a poor Korean immigrant family as they fight to control their destiny in 20th-century Japan (San Francisco Chronicle).

'There could only be a few winners, and a lot of losers. And yet we played on, because we had hope that we might be the lucky ones.'

In the early 1900s, teenaged Sunja, the adored daughter of a crippled fisherman, falls for a wealthy stranger at the seashore near her home in Korea. He promises her the world, but when she discovers she is pregnant--and that her lover is married--she refuses to be bought. Instead, she accepts an offer of marriage from a gentle, sickly minister passing through on his way to Japan. But her decision to abandon her home, and to reject her son's powerful father, sets off a dramatic saga that will echo down through the generations.

Richly told and profoundly moving, Pachinko is a story of love, sacrifice, ambition, and loyalty. From bustling street markets to the halls of Japan's finest universities to the pachinko parlors of the criminal underworld, Lee's complex and passionate characters--strong, stubborn women, devoted sisters and sons, fathers shaken by moral crisis--survive and thrive against the indifferent arc of history.

I love historical fiction and learning about eastern cultures but this isn't a novel I would have normally picked up. It's length and density might be the main reasons. However, I really enjoyed this novel. It's an epic family saga that will have you invested into every character. It's a beautifully written, atmospheric, and poignant story. You could feel the love between the family members and that they try to make the best out of their situation. It's a story of family and immigration while the country is in hardship and war. I enjoyed the perspective of both the Korean and Japanese cultures. There's so much heartbreak and sad truths throughout the novel, but they are written so beautifully.

I didn't think I would like this book. I love historical fiction but wasn't very interested in the Japanese/Korean ideals. As the story went along I feel in love with the characters and my heart ached for them and the issues that surrounded them. I learned much more than I thought I would about their lives and views. I became totally hooked on the book and couldn't wait to listen to more each day. Other reviewers mentioned about there were too many characters with different story lines in the second half of the book but those background and feelings lead you to understand that other characters could have the same feelings and tendencies whether verbalized or not. When one character is expected to act a certain way and then another one follows through with those same feelings without them being expressed it totally takes the reader off guard. I was listening while weeding in the flower garden one day and sat up and yelled "NOOOO!" My sweet dog came running to me to comfort me and I sat there stunned for a few minutes. How talented an author is when they manage to hook the reader and evoke such feelings. ALL of the characters and their story lines have meaning in this book. Don't rush through so fast that you miss the hidden meanings. The only thing I didn't like about the ending .... was that it was over! I simply didn't want this book to end. I had goosebumps when I listened to the last several words. Well worth the read and the journey!!!

This is an exquisite story that paints beautiful images in your mind's eye. The writing is as subtle as it is elegant. Others have been very detailed in their descriptions so, I will suffice it to say, I highly recommend reading it. It will inform and enrich you.

Found the story line rather depressing. Did not like the language or the concentration on more prurient aspects of the story. Just not my taste in reading.

Beautiful story of a family trying to survive the turmoil of Korean over a century. Loved it!

A family saga set over four generations and two countries- Japan & Korea and life there before, during and after the war. Overall an interesting story.

Didn't care for the narrator as it was difficult to differentiate different characters.

I really enjoyed this book and the narrator was fantastic!

Such a wonderful listen! Captivating yet relaxing. Would highly recommend.

I enjoyed the story of this family and following their story from generation to generation. It was very interesting to learn about the Korean culture and challenges during the 20th century and the challenges of the Koreans in Japan. I loved the first half of the story as it developed the characters and described the culture and their challenges. As the story progressed, i felt too many characters were introduced and some did not seem necessary to the story.

Enjoyed this book. Narration good. The ending started to seem a little more rushed, with a tad less detail than the beginning, still a strong story worth listening (reading).